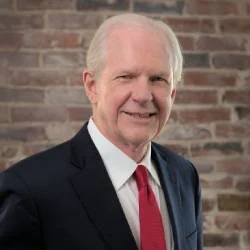 Biography: Mr. Crow practices in the areas of wills, trusts and estate planning, probate and trust administration, real estate and business transactions. He is rated “AV” by Martindale-Hubbell peer review rating service, which is the highest rating for legal ability and ethics. Mr. Crow has served as Prosecuting Attorney for the 18th Judicial Circuit East of the State of Arkansas, as City Attorney for the City of Hot Springs, Arkansas, and as Assistant Attorney General for the State of Arkansas, in the Antitrust and Litigation Divisions. He is a graduate of the University of Arkansas School of Law and Hendrix College. Mr. Crow is a licensed title insurance agent and a licensed property, casualty and life insurance agent. He is a member of the American, Arkansas and Garland County Bar Associations and the Arkansas Land Title Association. Mr. Crow is licensed to practice in the State of Arkansas, in the United States District Courts for the Eastern and Western Districts of Arkansas, and in the United States Court of Appeals for the 8th Circuit.